music that resonates today and speaks to tomorrow

Margaret Halbig
Pianist
Pianist MARGARET HALBIG is in high demand as both an instrumental and vocal collaborative artist. On staff at the SF Conservatory of Music since 2011, she regularly performs recitals and masterclasses and has collaborated with many esteemed Bay Area musicians including mezzo-soprano Frederica Von Stade, SF Symphony Principal Trombonist Timothy Higgins and Principal Tubist Jeffrey Anderson. An advocate of new music, Halbig is the pianist for Ninth Planet, an SF new music collective and a member of the wind-and-piano sextet Frequency 49. Halbig was a Collaborative Teaching fellow at Interlochen Arts in 2017 and 2018 in collaborative and solo piano and has been the pianist for Young Women’s Chorus of San Francisco since 2014.

Abigail Monroe
Cellist, Social Media Assistant
Cellist ABIGAIL MONROE hails from New Mexico and holds a Bachelor’s degree from the San Francisco Conservatory of Music in cello performance under the instruction of Jennifer Culp. She has appeared as a soloist, chamber musician, and large ensemble musician in venues across the United States. As a San Francisco resident, Abigail performs frequently throughout the Bay Area as both a classical cellist. She has served as both Principal cellist of the SFCM Orchestra, as well as the Miami Summer Music Festival Symphony Orchestra. As the winner of the Jackie McGehee Young Artists Competition in 2019, Abigail was also featured as cello soloist performing Elgar’s Cello Concerto with the New Mexico Philharmonic.

Brennan Stokes
Assistant Director
Emerging composer, pianist, tenor, and teacher BRENNAN STOKES earned a Bachelor’s of Music in Piano Performance from Pacific Union College and has been active in playing and singing in school ensembles and church choirs throughout his education. He earned his Master’s Degree in Music Composition at the SF Conservatory of Music in the studio of David Garner. He has had masterclasses in piano with Leon Bates and Sonstraud Speidel and in composition with Jack Perla and David Conte.

Roziht Edwards
Intern
Composer and independent artist ROZIHT EDWARDS is a first year master's student in the Technology Applied Composition program at the San Francisco Conservatory of Music and produces her original music on all major streaming platforms. With over twenty years of experience as a collaborative pianist and a cellist, she has performed with choirs, solo instruments, and both Western and Chinese orchestras. Born and raised in Taiwan, she has also performed in California, New York, Hawaii, Illinois, Oregon, Missouri, and Utah. 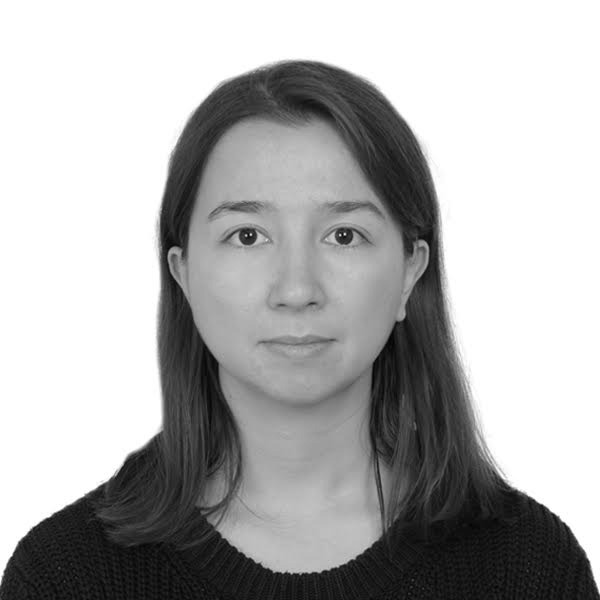 Merve Tokar
Intern
Composer and violinist MERVE TOKAR graduated from the Istanbul Technical University Turkish Music State Conservatory Performing Arts program in 2020. She is currently a master's student at the Academy of Art University in San Francisco, where she studies Sound Design and works with A/V hardware, software, and electronics to create music and sound effects for visual media. A co-founder of the EVA String Quartet, she is an Avid Pro Tools® and Dante Level 1 certified and production sound recordist.

Ilana Blumberg
Violinist
Violinist ILANA BLUMBERG has appeared across the United States and internationally, in solo appearances with the San Francisco Symphony, the Albany Symphony (NY), Symphony Napa Valley, and the Merced Symphony, as well as performances at the prestigious Santa Fe Chamber Music Festival, the Marlboro Music Festival, the La Jolla Summerfest as a 'Rising Star', the Aspen Music Festival, and many others. She appears frequently throughout the Bay Area with the Marin, Silicon Valley, West Edge Opera, Berkeley, and California Symphonies, as well as with the Golden Gate String Quartet, eco ensemble, and Left Coast Chamber Ensemble.

Chelsea Hollow
Coloratura Soprano
Coloratura soprano CHELSEA HOLLOW is an operatic activist, creating art that makes audiences think and heal collectively. Hollow uses classical music to take audiences on a journey using the texts, perspectives and dreams of activists. Her 2019 feminist recital Voice for the Voiceless chronicles a variety of voices of the feminist movement. Hollow’s 2020 recital Cycles of Resistance (rescheduled for Jan 2022) showcases seven activist movements from around the globe in the 20th and 21st centuries. Known for her “soaring high range” and “stage panache,” Hollow performs regularly in the United States and Mexico in operatic productions and solo recitals while building Concert Rebels, an organization with a mission to amplify marginalized voices and disrupt the classical music industry.

Mika Nakamura
Percussionist
Percussionist MIKA NAKAMURA is also an educator, and event producer who is passionate about connecting audiences to the concert experience. An avid orchestral and chamber musician, she has collaborated with various artists and organizations including the Magik*Magik Orchestra, Bard Music West, One Found Sound, yMusic, Sō Percussion, and eighth blackbird in venues throughout the US, including Davies Symphony Hall. She also served as the Festival Director for the 2018 and 2019 Hot Air Music Festivals, a free, all-day new music marathon celebrating contemporary classical repertoire and focusing on the accessibility of the genre to wider audiences in the bay area. Mika is a graduate of the University of California, Los Angeles and the San Francisco Conservatory of Music.

David Garner
Co-Founder and Senior Artistic Advisor
E4TT composer and co-founder DAVID GARNER won The American Prize in 2015 for his String Quartet No. 2. Garner's music has been reviewed as "alluring" and "a heady and touching revelation," and his works have been performed nationally and internationally by artists such as Suzanne Mentzner, Catherine Cook, David Krakauer, and Matt Haimowitz. Garner's opera, "Mary Pleasant at Land's End,” is in the final stages of preproduction. A faculty member in composition, chamber music, music theory and literature at the SF Conservatory of Music, Garner is a member of BMI, American Composers Forum, and the American Music Center.

Elinor Armer
A native Californian, composer ELINOR ARMER has spent her life on the West Coast, where she has taught piano, theory, composition, and music history at every level, in schools and universities, at her home in Berkeley as well as in master classes in the U.S. and abroad. For the last 50 years she has been affiliated with the San Francisco Conservatory of Music, where she established the composition department (1985) and continues to teach composition. Since 2014, the Conservatory has awarded the Elinor Armer Scholarship in Composition to qualified women applicants.

Kathy Barr
KATHY BARR is a non-profit consultant. She was most recently the Executive and Artistic Director of Old First Concerts. Prior to that position she was the Executive Director of the San Francisco Center for the Book. She holds a B.A. from Bard College and a Masters Degree in the Book Arts from Mills College. She is the proprietress of Small Plot Press.

Jeffrey Hoover
Composer JEFFREY HOOVER’s pieces—ranging from music for soloist to symphonic orchestra—have received recognition via through the prestigious Trieste prize, the international Luigi Russolo competition, the Lancaster Fine Arts Festival, and awards and grants, including from Mu Phi Epsilon. Hoover is also the author of The Arts and Society: Making New Worlds (Kendall Hunt Publishing). Also a visual artist, Hoover is known for creating unique interdisciplinary works where he combines his painƟngs with his musical compositions. Hoover holds a PhD in Fine Arts (Composition and Interdisciplinary Fine Arts) from Texas Tech University, as well as an MM in Composition and Musicology and an undergraduate degree from Ball State University.

Alden Jenks
Composer ALDEN JENKS has composed both electronic and “acoustic” music in a wide variety of forms — instrumental, vocal, and theatrical. His website shows the range of his work both within and outside music. Jenks received his B.A. from Yale University and an M. A. from the University of California, Berkeley. Recently retired from the SF Conservatory, he was director of electronic music and the recording studio, served as a professor of composition, and was chair of the composition department.

Kurt Rohde
Violist and composer KURT ROHDE is a recipient of the Rome Prize, the Berlin Prize, a Guggenheim Fellowship, a Radcliffe Institute for Advanced Studies Fellowship, the Lydian String Quartet Commission Prize, and an Arts and Letters Award in Music from the American Academy of Arts and Letters. He has received commission awards from New Music USA - Commissioning Music/USA, the NEA, and the Barlow, Fromm, Hanson, and Koussevitzky Foundations.Kurt is a curator at the Center for New Music and serves as Artistic Advisor for the Left Coast Chamber Ensemble. In the Fall 2019, he was appointed Artistic Director of the Composers Conference.

Bill Rudiak
Bill Rudiak holds an Associate Diploma in Piano Performance from the Royal Conservatory of Music and a Bachelor of Music with Honors in Theory and Composition from Western University in London, Canada. Since moving to the Bay Area in 1992 from his native Canada, Bill has established himself as an avid player of piano and instrumental chamber music with different configurations of wind and string ensembles, frequently performing in series such as Contra Costa Performing Arts Society Master Artists, Etude Club of Berkeley, Senza Rito, and Chamber Music at St. Andrew’s. Bill serves on the Boards of Old First Concerts in San Francisco, Berkeley Chamber Performances, Contra Costa Performing Arts Society, and is president of the Amphion Music Club. During the pandemic of 2020, Bill supported many musicians deprived of their regular income by donating the use of his performance space (including his magnificent Fazioli F228 piano), as well his A/V equipment and technical/post-production services for livestreaming and recording projects. In his day job, Bill works for an information security consulting boutique based in San Francisco, where as a Qualified Security Assessor, he performs credit card security audits for a growing base of clients.

Frederica von Stade
One of the most beloved musical figures of our time, mezzo-soprano FREDERICA VON STADE has enriched the world of classical music for three decades with her appearances in opera, concert, and recital. Well known to audiences around the world, she has made over sixty recordings with every major label, including complete operas, aria albums, symphonic works, solo recital programs, and popular crossover albums. Her recordings have garnered six Grammy nominations, two Grand Prix du Disc awards, the Deutsche Schallplattenpreis, Italy's Premio della Critica Discografica, and "Best of the Year" citations by Stereo Review and Opera News. She has been appointed an officer of L'Ordre des Arts et des Lettres by France.

Cynthia Whitehead
Linguist and lawyear CYNTHIA WHITEHEAD has worked in 35 countries in Europe, the USA, and Asia on the transfer of environmental policy and law between countries and regions. She edited and produced the first compendium of European Union environmental law (10 languages) and focused in the 1990s on preparation for the accession of central and eastern European countries to the EU. Since 1999, she has also worked in Asia on the development of policies and law related to environment and development. Whitehead has also been a member of the board of Directors of the the Blosser Center for Dyslexia Resources and of West Edge Opera.